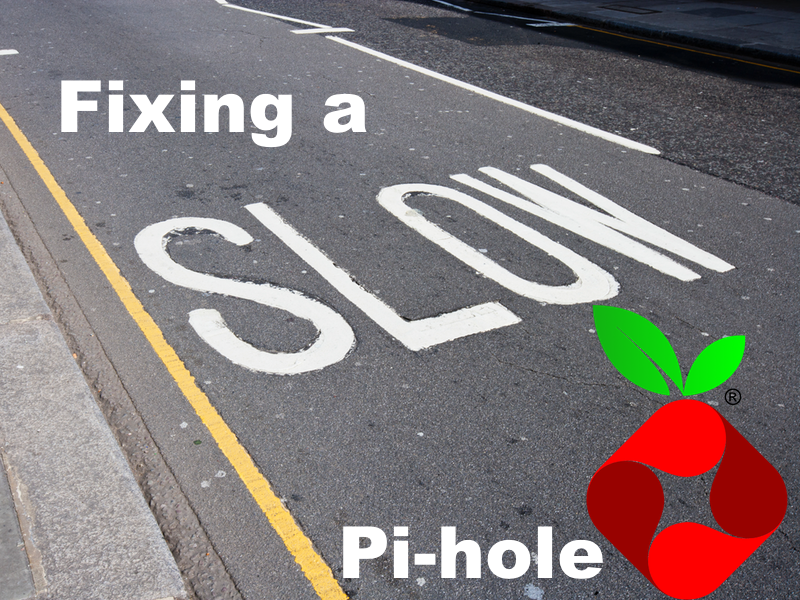 Pi-hole can make your network run faster, however, there are certain situations where Webpages will take a very long time to load (10-60 seconds or more).  There are several reasons behind this–most of which can be remedied.  This post explain the technical reasons why you may experience slow load times and provides solutions for them.

Understanding How Ads Are Delivered And How Pi-hole Blocks Them

There are several technologies and protocols that are used to deliver content (and consequently advertisements) to your Web browser or other devices.  In it’s simplest form, a DNS query is made for a domain, a TCP connection is established over port 80, and then an advertisement image (or other asset) is delivered via HTTP.

Pi-hole works by intercepting the DNS query and checking it against a list of known-advertisers.  If a match is found, the request is sent to the Pi-hole instead of the server where the ad is actually hosted.  In place of the ad, Pi-hole returns a 404 response, indicating there is no file, thus no ad.

It’s this interception of the DNS query, which enables Pi-hole to make your network faster.  Since your computer no longer needs to look up where the ad-serving domain is and then download the file from it, the request is caught before it leaves your network; your computer never goes out to the Internet to download the ad, but instead it simply understands that the ad that was requested does not exist, so there is nothing to display.

But advertisers have caught on and are using different protocols and ports to deliver their advertisements.  In part, they would probably make these changes at some point anyway because they offer some advantages over the typical HTTP advertisement.  But since ad blockers have risen in popularity, it’s likely driven a quicker adoption.

Most networks these days support IPv4 and IPv6.  If an advertisement fails to deliver over IPv4, it can still be delivered via IPv6.  Pi-hole can already use both protocols to block advertisements, but IPv6 is more complex so this is the first place you might run into issues with slowness when using it.

Without going into too much detail, IPv6 has several different types of addresses and your computer likely already has more than one assigned to it.  To fix slowness, you’ll want to enable Unique Local Addresses (ULA), which is the IPv4 equivalent of an address in the private IP range (i.e 10.x.x.x, 172.16.x.x, 192.168.0.x).

You can typically find a setting in your router to enable ULAs or your network might already be using them.  If the IPv6 assigned to your Pi-hole is in the fc00::/7 block, this is a ULA.

Once enabled, add this IP to your setupVars.conf and run pihole -g to apply it.

The main reason using an ULA improves speed is because they will not change, which is good because Pi-hole needs a static address to function properly.

Some ISPs do not hand out static IPv6 addresses.  So if you configured Pi-hole with an IPv6 address during installation and that address is later changed by your ISP, you now run into the problem the wrong (i.e. an invalid) IPv6 address in gravity.list.  Because Pi-hole looks to this file to find out where to go, your computer cannot find that IP address and the requests time out, causing the long loading times.

ULA has simply the advantage that it is defined purely local (not routable over the Internet) and as such does not change regardless of how the ISP might be having fun with the IPv6 prefix.

Many ads are now being delivered over HTTPS and port 443, the encrypted version of HTTP.  This encryption requires the use of a digital certificate to verify you are connecting to the correct server.  While the IPv6 fix for slowness was straightforward, the solution with HTTPS is a bit more complex.

Since Pi-hole only knows about the domain being requested and not the protocols being used to access it, Pi-hole will intercept HTTPS advertisements and since the Pi-hole does not have the certificate of the actual server being queried, you may see slow loading times waiting for the request to time out.

Although it is possible to install a self-signed certificate, it’s not something we do by default.  When doing this, you are creating a Man-in-the-Middle attack, which is not something we want to do to a fresh install.

As mentioned previously, Pi-hole is only handling the DNS queries and doesn’t know about the other protocols that are taking place.  But we can use iptables to manage these protocols to prevent time-outs allowing Pi-hole work it’s magic.

There are several iptables rulesets you can put in place to optimize your Pi-hole’s performance.  These commands are explained in detail here, but at a high-level, they will prevent your Pi-hole from timing out over HTTP/HTTPS requests on ports 80/443, resulting in a faster browsing experience.

The following commands should fix many of the slowdowns people have been experiencing.  You can read more about what these rules do, but you should have an understanding of what they do before running them.

You may also want to save your existing ruleset in case you want to restore them later.

These changes won’t be applied permanently unless you save them:

The QUIC And The Google

Since a significant portion of Google’s income comes from advertising, it’s not surprising they do what they can to get their ads delivered to end users.  The QUIC protocol is quite cool, but since it was developed by Google, they know how to leverage it to deliver ads in non-traditional ways.  Thanks to one user on our forums, the iptables rules mentioned previously include blocking ads over this protocol.

Testing And Verifying After Making These Changes

You’ll likely notice a difference if you simply browse the Internet as normal, but if you want to test it out with some static assets, you can try going to one of these URL’s (assuming the domain is on your blocklist):

If you are still seeing issues with HTTPS, you can use nmap on the machine experiencing the slowness to verify what’s actually happening:

You will want to look in the REASON/STATE columns.  We have seen some instances where iptables is set to block/reject traffic, but nmap shows the port as filtered, not closed.

If this is the case for you, you may have a non-standard configuration on your network and may require further diagnoses.  If this is the case, feel free to compile the necessary information and get a hold of us on Discourse and we’ll help figure it out.

Hopefully this sheds some light on why you might experience slow downs with your Pi-hole and how to fix them.  Feel free to reach out to us with any additional questions.