As always, we recommend that you read through the release notes and ensure that this update is something you wish to install.

You asked for it, we added it. Dark mode has been an often-requested feature. With Pi-hole v5.1, we finally have an inbuilt dark-mode which can be enabled on the settings page.

“Conditional forwarding” can be used to tell FTL to send queries to local devices (either with a local domain) and PTR requests for private ranges to a dedicated device (typically the router of the network) instead of the configured upstreams.
While this works for most users, it was not very flexible, as it implies three severe limitations (assuming the router is 10.1.2.3):

We added a new tool providing users with easily accessible error messages. Previously, all these massages were only accessible by looking carefully through /var/log/pihole-FTL.log. As a result, many issues stayed unnoticed. 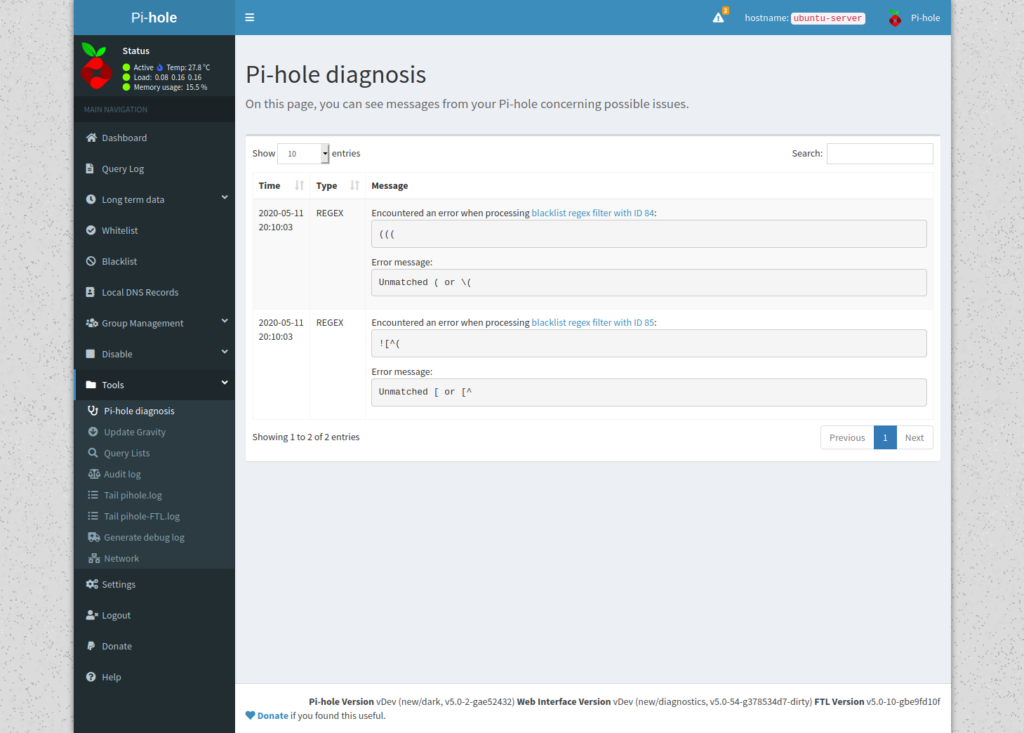 Fix for a severe bug in dnsmasq v2.81

We adopted dnsmasq v2.81 very early on. As it turned out, there was quite a severe bug in TCP query handling giving rise to a very large number of bug reports for FTL. We found a fix for this and it will be in dnsmasq v2.82. We have also applied the fix to Pi-hole FTL v5.1

Option to use the old style charts on dashboard

You now have the option to use the old curved line charts on the dashboard instead of the newer bar charts.

Exports more items and will import everything that is exported. Also, the teleporter export file name now includes the host name of the Pi-hole that generated the file (handy if you have multiple Pi-holes).

Improved handling of duplicate entries in adlists or domains

Further details can be found in the complete change log. You see, Pi-hole v5.1 again brings a lot of new stuff and also quite some fixes and other improvements: